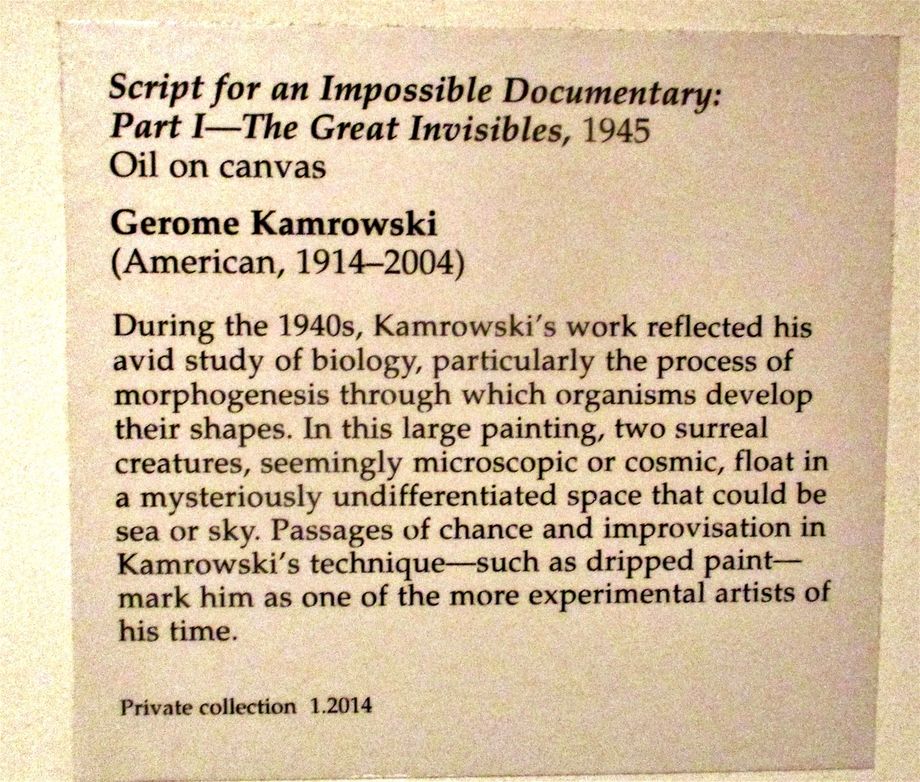 The label from a newer painting at the Cleveland Museum of Art by an artist who's work I did not know. In the title it mentions The Great Invisibles. That - The Great Invisibles - is not well known and something Breton wrote about in the first issue of VVV during his time in NY displaced by the war. VVV also had an essay on the writer H.P. Lovecraft by Robert Allerton Parker. The book Futures of Surrealism Myth, - Science Fiction and Fantastic Art in France 1936-1969 by Gavin Parkinson, Yale University Press explores that connection....The Great Invisibles. Hats off to the CMA for getting that work.

" Man is perhaps not the center, the cynosure of the universe. One can go so far as to believe that there exists above him, on the animal scale, beings whose behaviour is as strange to him as his may be to the mayfly or the whale. Nothing necessarily stands in the way of these creatures’ being able to completely escape man’s sensory system of references through a camouflage of whatever sort one cares to imagine, though the possibility of such a camouflage is posited only by the theory of forms and the study of mimetic animals." Breton

"...Breton’s myth imagined invisible, benign beings watching the human race in the way humans looked upon animals or insects. The sources he acknowledged for the idea were quite familiar ones to readers of Breton and are to historians of Surrealism, lying mainly in European poetry, fiction and the esoteric tradition. I attempt to reframe the origins of The Great Invisibles within an American context in order to place its interpretation more in tune with the new psychological atmosphere and cultural environment experienced by Breton and Surrealism during the Second World War. To this end, I discuss Breton’s speculation initially alongside the appreciation of the weird fiction of H. P. Lovecraft by Robert Allerton Parker in 1943 in VVV, through a close reading of the American author’s fiction and by paying particular attention to the Old Ones of his tales. But I also survey the kind of science fiction that had predated the Surrealists’ arrival on American shores in magazines such as Unknown Worlds, Air Wonder Stories and Weird Tales in the form of the alien-proprietor genre, authored by writers such as Eric Frank Russell and Edmond Hamilton. Like Lovecraft, both authors knew the writings of Charles Fort whose work was introduced to the Surrealists by Parker in 1942, the same year as the publication of Breton’s hypothesis of The Great Invisibles, and would find a rapt audience among younger Surrealists in the postwar period. When read against this strand of popular culture in the US, Breton’s myth of The Great Invisibles takes on a greater coherence and relevance, and can even be regarded as a shrewd and timely intervention in mythic life in the New World." -Gavin Parkinson

Later in his life Gerome Kamrowski described Script for an Impossible Documentary: Part 1 The Great Invisibles by Breton as a "myth that didn't fly."

The fact at roughly the same time that there seems to be a parallel development by Breton, and Lovecraft , separately (perhaps). Both have some common ground and that says to me that that basic concept taped into something of that new age. The Lovecraft aspect did not have any popularity or acceptance until the 1980's. Although it is not exactly what Breton imagined, Lovecraft, completely unknown and dismissed by critics, has found a growing awareness and appreciation of his work which uses some of those same basic points in The Great Invisibles. That translates to - forms of the myth Breton imagined during the global conflict of World War 2 are alive and growing.

"While we may consciously reject his cosmology as absurd, a part of us finds it chilling in it a confirmation of secret fears." Robert Bloch

There are no or almost no biographies in English on Breton.

In a sense the war refuges from Europe - Andre Breton the "Pope of Surrealism," Ernst, and Matta are The Great Invisibles. Their pivotal influence can be seen in the work of that time of De Kooning, Pollock, Gorky, Motherwell, Rothko.