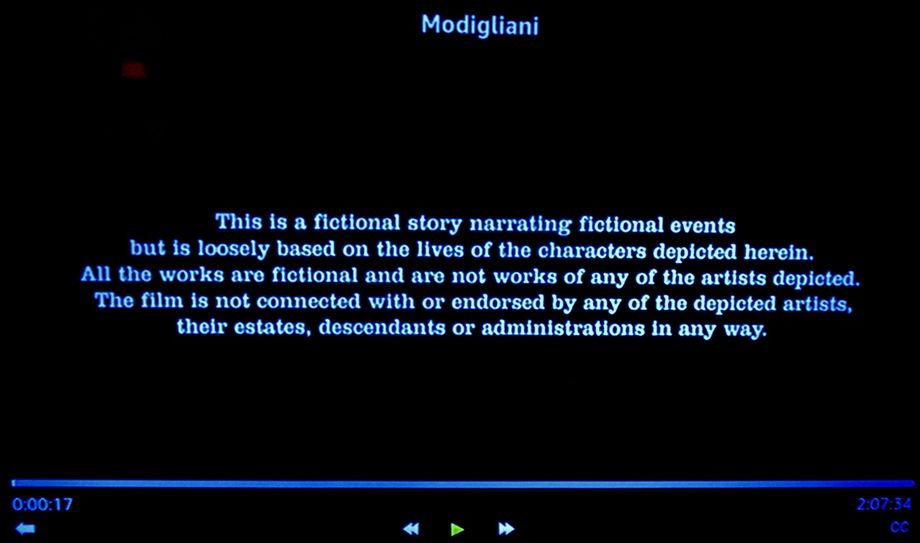 A disclaimer before the movie Modigliani which for some reason brings to mind the painting Metaphysical Interior by De Chirico, or Ernst, Dominguez, or De Chirico faking a De Chirico, in the collection of The Cleveland Museum of Art. It's just one example of the many Hollywood cheesy attempts to do a bio film about an artist. In this one it has Picasso on his deathbed calling out for.... Modigliani. From what I've read over the years probably the last thing Picasso would do on his deathbed is call out ... Modigliani. Years ago a good director John Huston did a bio movie on Lautrec titled Moulin Rouge. The Moulin Rouge dance segments were done very well, but then the movie starts to move into the cheesy. The worst part in that movie is when Lautrec on his deathbed finds out from his mother that the Louver has accepted his work for their collection, which is pretty much the opposite of what actually happened. Years later John Huston directed another movie The Life and Time of Judge Roy Bean and that had the disclaimer - "It's not the way it was, but the way it should have been." at the beginning of the movie. That fits the ending of his Moulin Rouge. Another example is the Genius: Picasso the bio miniseries which for the most part is good. Probably it is the first time in any English language bio film on Picasso that you will see Max Jacob, Apollinaire, and Andre Breton having a part, which was impressive to see. It did stick to various stories that people wrote from their time with Picasso which is a rare thing in a bio movie. The trouble started with the period when Picasso became involved with Jacqueline. Claude Picasso who is the head of the "Picasso Administration" and in charge of copyright and other legal matters concerning Picasso either didn't care about that last part of the storyline and how Picasso and Jacqueline Picasso were portrayed, or the producers of the miniseries found a way around his oversight. The worst offense in this last part was Picasso on his deathbed and the cheesy dream of a gathering of all his old flames, all of which have aged - except the surrealist Dora Maar . That was an ending along the lines of John Huston film Moulin Rouge where again all Lautric's characters gather around him, and in the docudrama Feud concerning Joan Crawford and Betty Davis. I once heard an art instructor say that it is too difficult to make a bio film on an artist because in most cases nothing much happens in their life. A frog jumping into a pond is nothing, but a good director can turn it into something special. The common, the everyday, the mundane, can open up Magical Precipices into what the surrealists called The Marvelous.