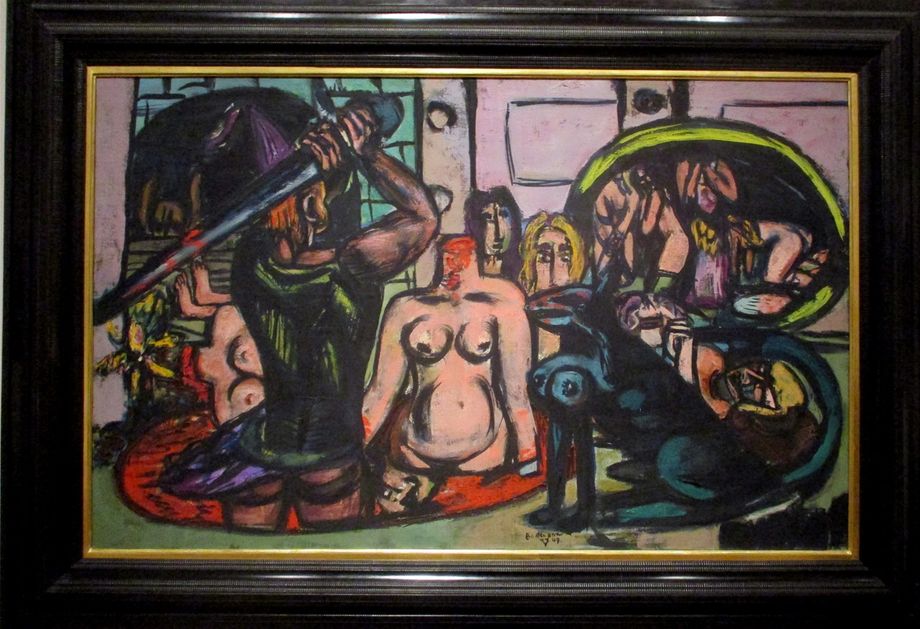 Perseus's last duty 1949 by Beckmann in the CMA collection. "Those who can make you believe absurdities, can make you commit atrocities."

— Voltaire. The CMA ownes some key important Monet paintings. One though was considered not one of his best. It was a gift but with the understanding that the CMA could sell the work if they wished to at some future date. The director of the museum did just that. This German Expressionists painting is one of the works purchased with those funds. For any museum to sell a Monet for a German Expressionists painting is something that gets your attention. With that the CMA made a bold statement that they have washed their hands of the days when a trustee once called their Brancusi Male Torso 1917 a downspout, and another was set against the CMA purchase of Cupid and Psyche by David. The Beckmann painting done just after WW2 makes a good companion painting with the CMA painting, Bull Skull, Fruit, Pitcher by Picasso done in 1939 just before the start of WW2. Which brings up the key event of WW2 - the nuclear bomb and it's enormous effect on the cutting edge artist living in New York at that time. With that pivotal nuclear event those artists wanted a completely new visual language for a new Nuclear Age. That phrase Nuclear Age has lost its power and a lot of its meaning since then. The visual imagery of the past was not enough. That important point is not brought out enough. The CMA now has a very good Picasso for the start of the war ( and Miro ) and a good Beckmann for the end of the war, but for the time during the war itself silence. Like WWI and its enormous and traumatic effect on the arts and countless other aspects of Western Culture, there is little to be said (at least for now) concerning that in the CMA other than the Man Ray sculpture Gift. Dada gets little respect and hangs around like gum on the bottom of your shoe. You can not and should not separate the art from the time it is done in. An interesting mini exhibition could be made from the works in the CMA collection concerning works in their collection that deal with War though the ages the Beckmann, Picasso, and works like the Etruscian, Sleep and Death Cista Handle from 400-375 BC and others could be a way to inform the CMA visiting public about their collection and how artists process events, their times, into their artwork ...something often a total mystery to the public.