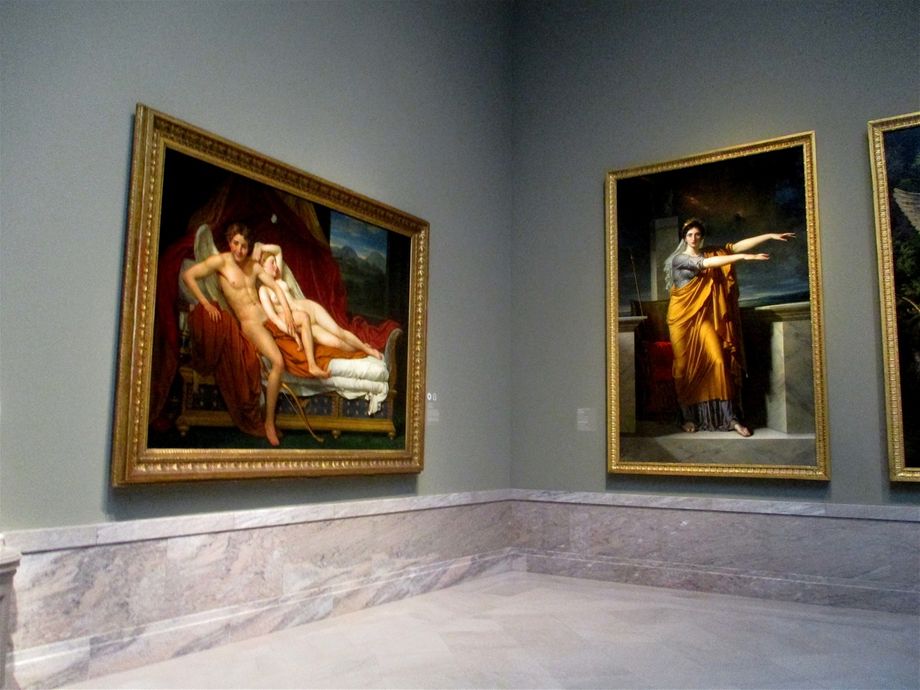 Wikipedia - " In theatre (especially in the illusionistic Western tradition), breaking character occurs when an actor ceases to maintain the illusion that they are identical with the character they are portraying. This is a more acceptable occurrence while in the process of rehearsal but is considered unprofessional while actively performing in front of an audience or camera (except when the act is a deliberate breaking of the fourth wall). One of the most common ways of breaking character is corpsing, in which an actor loses their composure and laughs or giggles in a comedy scene or scene requiring ludicrous actions. If the breaking of character is particularly serious, it would normally result in an abandonment of a take in recorded or filmed drama." At the Cleveland Museum of Art there are a series of five large neoclassical paintings by Charles Meynier containing all the key ingredients of the ideals of classical Greek art and references to classical mythology that go into a neoclassical painting. Right next to that series of paintings is the late David painting Cupid and Psyche. Cupid stands out and almost seems to leave the classical composition around it with a startlingly realistic expression. It brings to mind Harlequin with Violin by Picasso from 1918. In that painting everything is in the cubist style except the sheet music held by the harlequin, which is painted realistically and seems to leave the cubist composition of the painting.

The CMA David is an odd painting for that artist.

The Louvre has an odd painting by a well known artist. That painting is Carcass of Beef by Rembrandt. That is a painting that the Louvre had to hang because it was by Rembrandt but it was just odd to many with its hanging carcass of beef and smiling girl peeking in the background. Soutine saw the painting and in the 1920's set to doing his own series of paintings with a carcass of beef...

In the 1950's Frances Bacon went back to the Louvre's odd Rembrandt painting with a carcass of beef as reference for a whole series of important post war period paintings.

"Soutine purchased a beef carcass, hauled it up the stairs to his studio, and hung it from the ceiling. Eager to capture the variations of color in the raw flesh, he began painting, focused on his obsessive and direct observation of nature. The carcass began to dry and to lose the details of its color and texture. Undaunted, Soutine went back to the neighboring slaughterhouses for a pail of blood, which he brushed on the meat to revive its color.When the rotting meat began to smell, the neighbors complained, and, by some accounts, the police were called. In most versions of this tale, Soutine was able to convince the police that his artistic project was infinitely more important than the sensibilities of his neighbors."