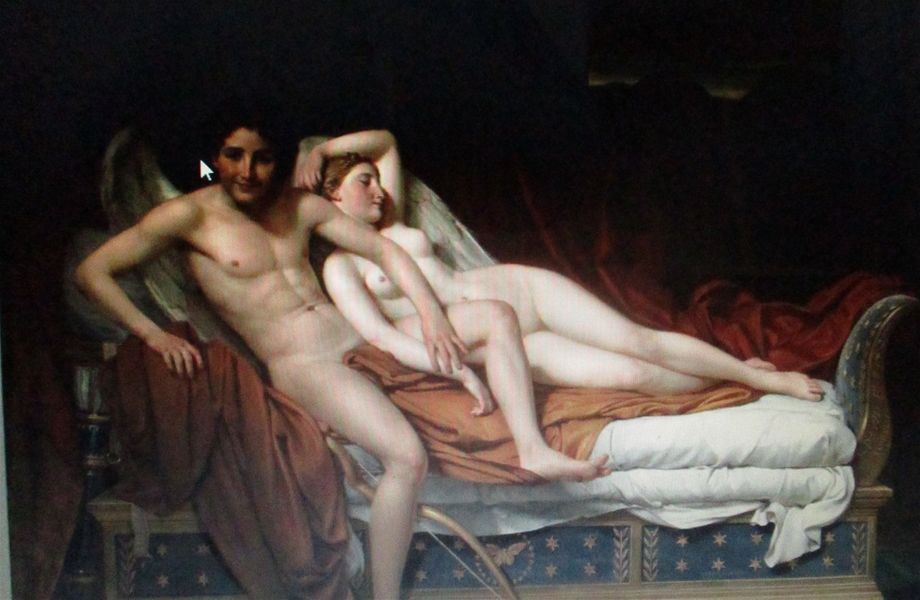 What I see in the work the creator of Neo- Classical art now an elderly artist in self exile at the end of his life looking back at his youth and it's vital part in his art in creating the Neo Classical movement with its intimate ties as the visual recorder to the now disposed and disgraced Napoleon. In addition to me it echos the two different schools of painting and thought - the emotional and the realism of the Romantic as in Eugene Delacroix and others, and the higher ideals and balance and symmetry of the Classical ( or in the 19th century Neo-Classical which David pretty much started ) seen in David's work and Ingres. Those two schools and their opposing views and attitudes were very much apparent in 19th century French art and are represented in the Cupid and Psyche. As much as possible in that time period within the constrains of the framework of Neo - Classicism I see David talking of himself and his past, the the ever present conflict in man and in art between aspects of romantic and the classical..the sacred and profane in love as one example....It's interesting that Picasso's La Vie the image of the Greek influenced classical ( Psyche ) or ideal, reappear in the face of the woman on the left who is also, on another level, was the lover of the artist she is and was with in real life with. . Both the David and the Picasso constantly shift between a number of meanings such as the symbolic, events in the artists life, and the art environment of its time, recurring themes in art history ... all being true but no single one dominating the explanation and meaning of the work. I'd like to see the two works hung for a time next to each other as opportunity to compare, discuss, and educate the museum public about those two works which though they are a hundred years apart, still deal with many of the same themes.